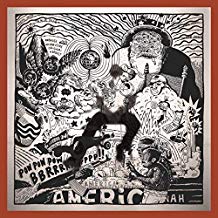 The title Origami Harvest has a certain symbolic significance. According to Akinmusire, “‘Origami’ refers to “the different ways black people, especially men, have to fold, whether in failure or to fit a mold.” “Harvest,” on the other hand, refers to the repeating cycles that recreate these hierarchical structures in society. Joined by the Mivos Quartet, rapper Kool A.D., drummer Marcus Gilmore, and pianist Sam Harris, Akinmusire and his collaborators take us on a journey through musical nodes of interconnectivity where contemporary classical music, hip hop, jazz, funk, soul, and spoken word are juxtaposed and blended together into creative pieces of art.

The album opens with “A Blooming Bloodfruit in a Hoodie,” a composition in recognition of Trayvon Martin’s terrible death. Beginning with sparse melodic and harmonic exchanges between the piano and string quartet, coupled with stirring drum rolls by Gilmore, the tune gradually builds from a somber musical texture to a rousing and uplifting hip hop groove, laying the foundation for trumpet and vocals. Kool A.D. enters the conversation with his poetic lyrics, spouting phrases filled with signifying connotations—“We are the universe learning to love itself,” “And It Don’t Stop,” and “to the bang bang boogie, the bang bang the boogie the beat”—that address societal spheres, all while Akinmusire’s provides emotional support with his elegant and virtuosic trumpet performance.

The following track, “Miracle and Streetfight,” expands upon these socially conscious lyrics while creating hybrid musical structures utilizing avant-garde, free improvisation, and deconstructed hip hop grooves. Later, on “Free, White and 21,” Akinmusire maintains his concept of extremes, highlighting the issue of racial injustice in American society by echoing the names of the victims of police brutality and racial profiling: “Yvette Smith, Tamir Rice, Shereese Francis, Trayvon Martin, Michael Brown…,” and many more. In saying their names, Akinmusire not only raises awareness of racial inequality, but he also provides a space for us to remember these sons, daughters, brothers, and sisters.

Origami Harvest is, in my opinion, a brilliant socio-political musical statement. Akinmusire successfully manages to present a collage of extremes while using them as vehicles for commenting on the disjunctures and divides in our society. This album is certainly at the crossroads where social commentary meets music and art.