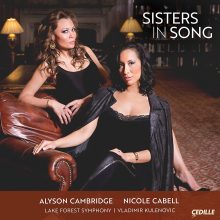 Sisters in Song represents the first collaboration between world-renowned American sopranos Alyson Cambridge and Nicole Cabell. The pair met nearly two decades ago in the Chautauqua Institution’s Summer Voice Program where they became fast friends, colleagues, and—for lack of a better phrase—sisters in song. As both Cabell and Cambridge are in-demand sopranos, their paths have continued to cross in their professional and personal lives. In the liner notes for the album, the two write that they “both had the desire to create an album together that allowed us to show our various musical sides and voices in harmony.”

Produced by Chicago’s Cedille Records—a “not-for-profit record label dedicated to extraordinary classical music and the brilliant artists who create it”— Sisters in Song is an album of classic opera duets (Léo Delibes’ “Flower Duet” from Lakemé) and commissioned duet arrangements of classical pieces (Gabriel Fauré’s “Clair de Lune), a folk song (“Black is the Color of My True Love’s Hair”), and Negro spirituals (“Sometimes I Feel Like a Motherless Child”). Cabell and Cambridge are accompanied by Chicago’s Lake Forest Symphony conducted by Vladimir Kulenovic. The duet arrangements of the classical pieces, folk song, and spirituals were completed by Chicago-based composer and arranger Joe Clark.

The chemistry and beauty heard on Sisters in Song is reminiscent of Kathleen Battle and Jessye Norman’s 1991 collaboration Spirituals in Concert. Similar to Battle and Norman, the collaboration between Cambridge and Cabell is sure to resonate with listeners for years to come.