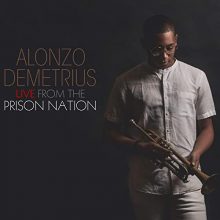 On his debut album, Live from the Prison Nation, trumpeter Alonzo Demetrius strives for an educational as well as a musical experience. Expressing a sense of urgency, he hopes to inspire listeners into taking action against the Prison Industrial Complex (PIC). A recent graduate of the Berklee Global Jazz Institute Masters Program, Demetrius conceived of this project while taking classes that dealt with the social and political significance of activism for musicians. His website not only delves into the thoughts behind each track, but also offers ‘conversation starters’ that provide discussion questions and workshops to facilitate the development of community action plans. Backing him on this project is his band, The Ego, featuring tenor saxophonist Yesseh Furaha-Ali, pianist Daniel Abraham Jr., bassist Benjamin Jephta, and drummer Brian Richburg Jr.

Opening with the track “Expectations,” Demetrius samples excerpts from a 2003 speech by Angela Davis as he explores the reality and psychological toll of those trapped within the system. Entering the conversation as Davis lectures on the misguided notion of prison reform, the band uses various sonic devices, from a wailing trumpet to harmonic dissonance and frenetic pacing to represent “the inevitable effect of the PIC that has seeped its way into all facets of life for people of color, particularly Black people, in the United States.” Likewise, the ostinato piano chords leading to a steadily building climax on “The Principle” speak to the perseverance required of those who have fought “through centuries of injustice while simultaneously preserving their cultural principles and sense of self.”

The brief “Yessuh’s Interlude” separates the two halves of the album and offers the tenor saxophonist a moment in the spotlight. Following is “Mumia’s Guidance,” which samples excerpts from activist MumiaAbu Jamal’s Prison Radio podcast where he speaks about the power of movements to “open doors that have been locked shut for generations,” emphasizing “it is only movements that bring change.” The quintet initially maintains a harmonious, introspective accompaniment to Mumia’s thought-provoking message from within prison walls, but gradually amps up the volume and drowns out his voice. This is an extremely effective device, as the listener strains to hear the voice of the oppressed. Clocking in at nearly 15 minutes, the final track, “F.O.O Shit” (aka Fraternal Order of Oppressors), addresses fighting the system and police brutality. Launched by an “Intro” that samples protest chants from Black Lives Matter, the track features an extended solo by Yessuh followed by an answering solo from Demetrius. In the closing bars, a sharp rat-a-tat-tat rings out like a barrage of bullets, followed by silence.

If you are seeking music with a message, Live from the Prison Nation offers so many different facets that it is impossible to grasp all of them with a single listen. Music has always portrayed a role in social and political movements, and Demetrius is eager to be at the forefront. He states, “With this album I aim to continue the global conversation and provide a platform for those whose voices are often left out.” This is certainly an auspicious debut for Alonzo Demetrius and The Ego!