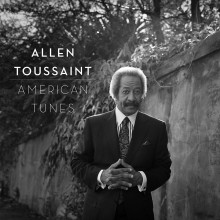 Allen Toussaint’s final album is a commemorative collection of reimagined compositions by musical visionaries who have defined American music, particularly in the genres of jazz and blues. Released within a year after his untimely passing, American Tunes tells the story of peaceful weariness from a lifetime of sensation, longing, and unpredictable complication. Toussaint is a beloved New Orleans icon known far and wide as an award-winning composer, performer, producer, and collaborator since the 1950s. This album is a hat’s off to the musicians who inspired Toussaint while also demonstrating his undying commitment to his home and the people of Crescent City.

American Tunes complements Toussaint’s former record, The Bright Mississippi (2009), which was also produced by Joe Henry and released on Nonesuch Records. It matches his interest in intertwining New Orleans elegance into his instrumental performances written by the jazz and New Orleans R&B greats. Fats Waller, Duke Ellington, Billy Strayhorn, Bill Evans, and more are featured in addition to a few exciting guest musicians. Toussaint especially recognizes Professor Longhair, his longest enduring inspiration, whose song “Mardi Gras in New Orleans” is slowed and sweetened on this album, turned into a more reflective instrumental rendition.

The album opens with “Delores’ Boyfriend,” a steady and playful blues instrumental by Toussaint following into a mischievous, yet almost vaudevillian tune titled “Viper’s Drag” by Fats Waller. Toussaint performs solo for much of the album, though each track stands alone in distinction, such as “Big Chief” and “Hey Little Girl.” However, a small band joins Toussaint on certain tunes such as “Confessin’ (That I love You),” “Lotus Blossom,” “Rosetta” and “Waltz for Debby.” Percussionist Jay Bellerose, tenor saxophonist Charles Lloyd, bassist David Piltch, Greg Leisz on Weissenborn and electric guitarist Bill Frisell each carefully and delicately add texture to the compositions, highlighting Toussaint’s unmistakable grace on the piano. On “Danza, Op. 33,” an orchestral section along with pianist Van Dyke Parks supports Toussaint on this classical tune composed by New Orleans native Louis Moreau Gottschalk.

While the majority of the tunes do not feature the original lyrics, a pleasing collaboration takes place on two songs of this album performed by vocalist Rhiannon Giddens of the Carolina Chocolate Drops. Giddens joins Toussaint, providing her deep soulful vibrato, in celebration of Duke Ellington on “Rocks in my Bed” and “Come Sunday,” which was famously performed by gospel singer Mahalia Jackson. Toussaint’s second original composition, “Southern Nights,” a refreshing piano duet with Van Dyke Parks, brings the album to a near close.

On the last track of the album, Toussaint finally takes his turn at the microphone singing his arrangement of Paul Simon’s “American Tune.” A song with lyrics so touching and appropriate, it is truly difficult to listen with dry eyes. Simon’s lyrics are reassuring while Toussaint’s voice is calming as he sings:

You can’t be forever blessed

Still, tomorrow’s going to be another working day

And I’m trying to get some rest

That’s all I’m trying to get, some rest”

Pleasant and playful, though distantly melancholic, American Tunes is a satisfying collection of New Orleans jazz, R&B, and classical music clearly inspirational to a musician who has in turn inspired other creative minds. In the liner notes, Tom Piazza reflects on Toussaint’s return to New Orleans after Hurricane Katrina: “His return was a sign that New Orleans, itself, was back. You would see him, as before, at the supermarket, or at a concert, and every time you saw him you were happy and grateful.” Friends and fans are happy and grateful as well to have received American Tunes as a parting gift in remembrance of the great Allen Toussaint.