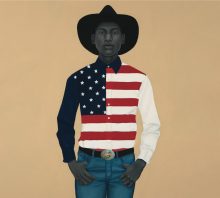 Multifaceted mezzo-soprano Alicia Hall Moran, who recently starred in the national tour of the Tony Award-winning production of Porgy and Bess, has embarked on a variety of significant projects over the past few years. Her critically acclaimed staged concert work, Black Wall Street, follows a path from Oklahoma and the Tulsa Race Riot of 1921 to New York’s Wall Street—which not coincidentally traces her own family’s journey.

Last December, Hall Moran released her album Here Today, which flew under our radar since it’s only available via her website. The project is a combination of original songs interspersed with classics which receive her own unique, genre blending spin.

Hall Moran demonstrates her creativity and artistry on the opening track, “Signed, Sealed, Delivered,” a fantastic mash-up of Stevie Wonder’s hit song with “Habañera” from George Bizet’s Carmen. This arrangement is evidence of Hall Moran’s operatic training and, as she segues back and forth between classical and R&B styled sections, it is clear she holds both genres in equal regard.

“Oklahoma Girl,” a brief selection from Black Wall Street in the form of a lullaby, encourages adapting to new surroundings as her family journeys eastward. Several additional selections from the musical are also included: “I Am the Fire” featuring violinist Chala Yancy, “Train to Wall Street” featuring guitarist Thomas Flippin, and the improvisational interlude “Black Wall Street.”

On the standard “Feeling Good,” Hall Moran is joined by husband Jason Moran, the noted jazz pianist, who provides a lush background enhanced by strings. A poignant rendition of “God Bless the Child” stretches out the melodies, with Hall Moran performing the vocals as well as the jazzy piano accompaniment. Jason contributes once again to “Love Hurts,” another Hall Moran original that would be at home in a scene on Broadway, thought the arrangement is a great deal more sophisticated than the usual fare.

Two amazing arrangements of songs by Roland Hayes are included, “Round About de Mountain” and “Two Wings,” both featuring the group Harriet Tubman (Brandon Ross, guitar; Melvin Gibbs, bass; JT Lewis, drums). The latter is also the title of Jason and Alicia’s forthcoming production, “Two Wings: The Music of Black America in Migration,” which will “weave together a broad spectrum of musical styles to tell the story of the African-Americans who relocated from the South and how their journey shaped American culture. The work debuts in March 2019 at Carnegie Hall before touring to the Kennedy Center and Chicago’s Symphony Center. If this track is any indication, the performances should not be missed.

Here Today sets Hall Moran apart as an extraordinary composer, arranger, vocalist, and pianist who is equally at home on Broadway and in the concert hall. Most notable, however, is her ability to excel across the full spectrum of the African American songbook, while also contributing new works that will no doubt become classics. Highly recommended!