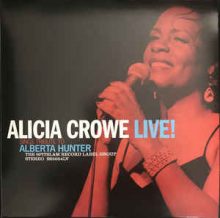 Jazz vocalist Alicia Crowe offers a sweet send-up to the legacy of the great Alberta Hunter with her new album. Recorded live on November 14, 2018, during her Alberta Hunter Tribute show at the Triad Theater in New York City, Crowe is backed by Takaaki Otomo on piano, Noriko Ueda on bass, and George Gray on drums. Covering many of Hunter’s greatest hits, from “My Castle’s Rockin’” to “Handyman,” Crowe presents a musical portrait of one of the great vocal performers of the twentieth century.

Alberta Hunter’s life, from her impoverished childhood in Memphis and her successful early singing career in Chicago, New York, and Europe, to her later nursing career and her comeback as a performer in her eighties is the stuff of legend. Her success as an African American woman who overcame obstacles and broke racial barriers in music continues to inspire. She was also a consummate master of storytelling through performance. Crowe’s tribute show, with its selection of Alberta Hunter classics, gives us a taste of Hunter’s musical personality: fearless, funny, and often somewhat raunchy, with an impeccable sense of rhythmic timing.

Although Crowe’s voice is much smoother than Hunter’s and her tempos are often a little slower, her sincerity shines through. Crowe’s inspiration for this project is personal as well as musical: her parents met while working with Alberta Hunter at New York’s Goldwater Memorial Hospital in the 1950s. Standout tracks include “You Can’t Tell the Difference After Dark” and the classic “Downhearted Blues.”

Alicia Crowe Sings Tribute to Alberta Hunter Live! is evidence that Hunter’s musical and cultural impact has not diminished, even 36 years after her death.