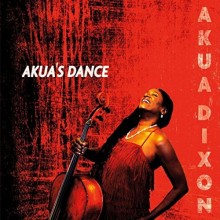 Jazz cellist, arranger, and composer Akua Dixon’s latest project, Akua’s Dance, is an album that does an excellent job of displaying her range as a musician. Dixon has enjoyed a varied career, from playing in the Apollo Theater pit band to arranging strings for Lauryn Hill to serving as the director of new music for jazz violinist Noel Pointer’s ensemble String Reunion.  She is also well known for her collaborations with her sister, the late violinist Gayle Dixon—the two were in Quartette Indigo with fellow musicians Maxine Roach and John Blake, Jr.  As far as the musicians featured on Akua’s Dance, this project is a departure from the string quartet and other string centered ensembles that Dixon has worked with in the past.  Instead, this album features guitarists Freddie Bryant and Russell Malone, bassists Kenny Davis and Ron Lewis, and drummer Victor Lewis.

Highlights from the album include “Afrika! Afrika!” and “Orion’s Gait,” with these being the two songs where Dixon shines most brightly. She varies her technique depending on the mood she wants to evoke, going from a lilting, singing, tone in one moment to a crisp technique the next.  Also particularly impressive is Dixon’s use of range throughout the album, continually bringing the cello to new heights.  She even steps forward as a vocalist in “Throw it Away,” adding her voice to the rich ensemble.  In addition to offering her own voice as an instrument, Dixon also switches between the cello and the bass violin on this album.  The bass (or baritone) violin offers a more full bodied sound than the cello, particularly on “I Dream a Dream.”

On this album, Dixon utilizes tools and techniques from various traditions, from jazz to spirituals. As Dixon’s third solo album, it is quite the departure from her earlier work (including her 2015 self-titled release), but still shows the same dedication to the craft as a musician, composer, arranger, and all around artist.