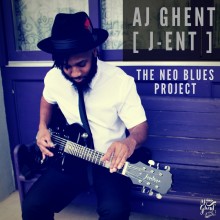 AJ Ghent, hailing from Fort Pierce, Florida, has music literally running through his veins. His great uncle, Willie Eason, is the creator of the “sacred steel” tradition—a style of pedal-steel guitar playing that’s unique to certain African American Pentecostal churches—and his grandfather, Henry Nelson, is the founder of the “sacred steel” rhythmic guitar style. With role models like these, it’s no wonder Ghent wore out his father’s sacred steel CDs by the age of twelve. After high school, he and his wife, singer MarLa, packed up and moved to Atlanta, Georgia where soon after Ghent began a mentorship under the legendary Colonel Bruce Hampton, one of the original founders of Atlanta’s Hampton Grease Band. Gaining experience with Hampton’s band set the stage for Ghent’s subsequent career moves, including being “true to himself” as Hampton advised.

Ghent’s newest release, The Neo Blues Project, is a study in just that. The entire album is something different altogether—a musical fusion of blues, steel guitar, and rock that takes art and skill to master. But that’s something that Ghent has spent his whole life perfecting, along with his custom built 8-string lap steel hybrids. The offering weighs in at just six tracks, but don’t let its size fool you. This album packs a solid punch right where it’s necessary to keep the music in your head long after the last chord fades.

On his rock anthem “Power,” Ghent offers a track to fuel a revolution: “I’m gonna wait it out, ‘til my change comes / and I’m gonna pray, it won’t be long / ‘cause I’ve been tempted and I’ve been tried / and I’m a soldier ‘til I die / so you can bring it on, all your pain / you know why? ‘cause it’s a revolution comin’”

Combining his own style with elements of rock guitarists like Jimi Hendrix and Lenny Kravitz, Ghent part-wails and part-steels his way through each song. “Long List Friend,” co-written with his wife, is a blues ballad all of us can relate to in our search for “The One.”

But if you are celebrating the letting go of a former love, check out the final track, “Gonna Rock.” Its meaning and intent are completely celebratory, to say the least. “Wash Ya Hair” is a fun, catchy tune that really brings all of Ghent’s diverse talents of vocalization and guitar-playing to the forefront: “Shake ‘em off, wash your hair, let it shine, Everywhere.”

Ghent’s compact project completes its mission. The Neo Blues Project entertains the senses, introduces us to the full range of Ghent’s talents, and gives us a foot-tapping, air-slamming trip into the world of blues rock in legendary style. If this is Ghent being true to himself, I personally can’t wait for anything this talented artist has to offer us.