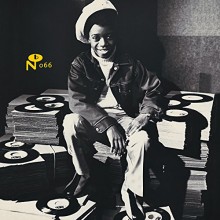 Afterschool Special: The 123s of Kid Soul, is a compilation album featuring 19 little known soul songs from young groups across the country, spanning from the late 1960s to 1980.  Given this time frame, many of the groups were clearly influenced by the Jackson 5, such as the Scott Three, featuring the Scott brothers from College Park, Georgia.  Their track featured on the album, “Runnin’ Wild (Ain’t Gonna Help You),” is one of only two originals they performed, with the rest of their repertoire being made up exclusively of Jackson 5 and Osmond covers.  Although the Scott Three never went far, eldest brother Randolph’s daughters (LaTocha and Tamika Scott) went on to become half of the popular R&B group Xscape.

Other songs on the album steer clear of the Jackson model and run the gamut. For example, the opener is a call and response chant from the Bethlehem Center Children’s Choir, titled “I’m a Special Kid.”  Recorded by musician Thomas Moore in 1980, the simple tune features the affirmations of some special kids.  The final track is also inspirational: kids singing a biography of James Brown.  Set to a dramatic minor piano accompaniment, this song features Nancy Dupree and her students in upstate New York in 1969.  Key facts of Brown’s life include: “Born in Augusta, Georgia/he was a poor little shoeshine boy/now he’s the king, the king of soul/hey hey hey.”  This song was composed after Dupree’s class had seen Brown in concert in Rochester the weekend prior.  Other highlights include a Brother’s Rap cover of Gil Scott-Heron’s “The Revolution Will Not Be Televised,” as well as a bilingual anti-drug anthem: “I Am Free, No Dope for Me/Yo Soy Libre, No Droga Para Mí.”

Overall, this is a set of charming and earnest kid soul songs, varying in scope but all gems nonetheless.