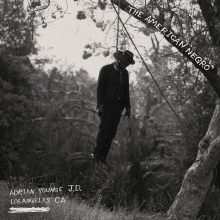 In the wake of social unrest and political trauma, composer Adrian Younge, like many before him, has now become part of a canon of musical and literary expression that will likely live on for generations. Younge’s new album, The American Negro, offers 26 tracks of message songs and soulful instrumentals interjected with Younge’s spoken word treatise on racism in America. Through the album, he “dissects the chemistry behind blind racism, using music as the medium to restore dignity and self-worth [of Black people]… It should be evident that any examination of black music is an examination of the relationship between black and white America. This relationship has shaped the cultural evolution of the world and its negative roots run deep into our psyche.”

Younge’s music career has been successful on many levels: producing music for artists such as Wu-Tang Clan, Jay Z, Common, Talib Kweli and many others to note; and composing for films including Black Dynamite (2009) and the Netflix series Marvel’s Luke Cage. Also informing Younge’s work are the many years he served as an entertainment lawyer and law professor. In a recent interview he stated, “When you study law, you get to see who the law was actually made for. It leads you to slave codes and Black codes, Jim Crow laws. America is a country that was founded or established as a slave society, not a society that happened to have slaves.”

On The American Negro, Younge follows a music-making tradition that is both aesthetically pleasing to the ear and full of beautiful yet traumatic poetry and lyrics. He expresses regret that an album like this is still necessary due to the continued struggle of African Americans in the United States to arrive at a simple human status of “mattering.” Younge’s music mirrors that of artists like Marvin Gaye, Gil Scott-Heron, Curtis Mayfield and The Last Poets, delivering message songs that reflect the current position of Negros in America. This concept is also embodied the opening spoken word track, “Revisionist History,” where Younge states his musical thesis: “The musician is the document—an aural transcription of experience and perception through the vantage point of self. And if music is the message, for the Negro, music is the Black critique.” Younge believes that Black musicians act as living “documents” and art, music, dance, literature, poetry and other expressions are the “message.” The “documents” and their “message” serve as tools to expose the throes of racism and injustice, yet even with centuries of verbal and physical expression and constant developments and redactions to this message, Black folks still endure subjugation.

The album’s title is a reflection of William Hanibal Thomas’s 1901 work by the same name. Thomas’s unapologetic critique details what he thinks to be a hopeless psychological battle that African American people are not capable of winning, suggesting they assimilate to white Christian Aryan lifestyles in order to achieve acceptance into society. Keeping in mind that Thomas lived in a society just a few decades removed from the 1865 Emancipation Proclamation, one could only imagine the racial injustices that he and other African American people endured. During this period, measures were taken by white society to continue to exploit the free labor of Black people, such as imprisonment, low wages for sharecropping, and other devices. Thomas accepted that Black people were living in a world not designed to protect them against unjust forces; they were living in a world designed to make them seem less than white. His ideas about assimilation were shared among many other Black people who chose to neglect the parts of themselves that connected them to their African past, instead succumbing to the white Europeanized way of life with hopes of achieving wealth and a sense of place in the world.

Younge refers to this act of succumbing as a “minstrel dance… which exposes the prodigious clockwork behind racism and hate in western society.” In the spoken word track “Jim Crows Dance,” Younge says “They claim my syncopation is the cause of imprisonment, our welfare, our sullen countenance; everything that is wrong with America.” He refers to these claims and the statistics behind them as a broken record that skips and is, therefore, rendered useless in any conversation about Black folks being the problem in America. On order to truly have a conversation about issues in America and to solve those issues would call for a dismantling of white wealth and ways of life.

The last track of the album, “Sullen Countenance,” revisits Younge’s thesis from the opening track about the imprint of stereotypes upon Black life and how this distorts Black identity from birth. He poses the question, “How is it that we are molded at the seed, blooming Black leaves as we bleed?” This quote is a direct link to the album’s cover, which depicts a man who has been hung from a tree. Younge said in an interview that the album art work represents Black people “…dying without any judicial reprisals…because of a system that our institutions put together years ago” that “administer justice without a trial.” At what point in history will Black people experience true freedom away from “justified” horror? Younge’s closing remarks:

“Sadly, this album will never be out of date, but I know the universal language of sound will reverberate beyond my years. Listen closely. Raise your children to love like children; embrace humanity, regardless of hue. Be the best version of yourself, because there is nobody that’s better at being you, than you. Be comfortable with being uncomfortable, in the moment, as the moment is fleeting. Know that fear causes trauma to the brain, resulting in the paralysis of the mind, body and soul. The antidote is understanding, and the mission is to remain standing beyond our own mortality. A message from the American Negro.”

These final words are similar to the spoken narratives Younge shares throughout the album, offering food for thought as well as tools for navigating being Black in America. He understands that Black people may not receive true freedom in this lifetime, but perhaps we can begin to unmask ourselves and truly see who we are and what we deserve. In the words of former President Barack Obama, “We are the ones that we have been waiting for.”