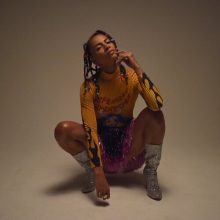 Soulful and sultry vocalist, bassist and producer Adeline has released her highly anticipated sophomore project, Intérimes, a collection of seven songs that incorporates the sounds and styles of R&B, soul and funk. The title of the French-Caribbean artist’s release is a mash-up of the French words “intérim” (the time in between) and “rime” (French for rhyme), noting that each track captures a specific mood as a day turns into night. The project is completely self-produced, allowing Adeline to create music that perfectly complements her style. “Producing my own music is when I feel most complete artistically. Everyone’s process is the best process as long as it’s true to them. Producing is just the way that I love to make music. And the biggest part of it is that it’s fun!”

Originally scheduled for release in early June, Adeline decided to postpone the release of the EP to give space for important conversations taking place around Black Lives Matter. A press release states that Intérimes confirms her role as an artist daring to challenge conformity. Speaking about her involvement in the recent #BLM protests, Adeline offered the following statement: “The recent events of this tumultuous 2020 have made me reflect on what my place is in the world and in the music business. I’ve always been aware of the responsibility artists have to spread a positive message, but I realized that whenever I perform and use my voice, it is a form of protest. Being an immigrant Black woman, it is a constant fight internally and externally to find my place in this world.”

Intérimes focuses on outlining Adeline’s velvety and soulful vocals, showcasing her talent as a singer, as well as highlighting her development as a producer and songwriter. “I have been working a lot on developing that side of my songwriting, the side that thinks about the singer and not just the song,” Adeline said in an interview. “Right before I started working on this new EP, I realized that I had at times sort of forgotten about the singer in me when creating music. I was more focused on developing my style as a producer and songwriter. Once I felt a little bit more comfortable with those areas I realized, now I have to actually sell the song, because people will listen to my voice first.”

There are several strong singles in this project, including “Twilight,” a sultry track about a relationship that’s ending, and “After Midnight,” a disco-infused party jam, that were released as self-directed, homemade (quarantine) videos. The themes of Intérimes revolve around love in a multitude of forms, including marriage, a summer fling, whether it’s gay or straight. For example, “Just Another Day” is about “questioning your place in the world, not feeling accepted, pretending to be in someone else’s shoes,” Adeline stated in a press release. “I wanted to show characters that exude confidence and self-acceptance as a message of hope for the LGBTQ people out there who feel rejected and misunderstood.”

Adeline offers a breath of fresh air for the R&B genre, combining funk and pop into her into her new release while also bringing a sense of cohesion and consistency that is rarely seen in the industry. Despite the short 30-minute runtime, she expresses the ups and downs of an emotional journey, allowing the listener to feel like they gained something internally. Intérimes is a beautiful hidden gem that deserves at least one listen from start to finish.