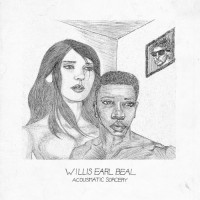 Willis Earl Beal has a received a lot of press, marketing him as a Black Daniel Johnston, an outsider musician, a naïve primitive artist. Most of the articles that have surfaced recently have focused fairly heavily on these characterizations, but I’d prefer to just focus on some facts. (1) Beal is a 27-year-old musician from Chicago who recorded a rough-hewn collection of demos that were released in April on the album, Acousmatic Sorcery. (2) It’s a very promising release.

Acousmatic Sorcery is a truly lo-fi record, as illustrated by a handwritten note on the back of the album packaging that says “Disclaimer: This record was recorded on bad equipment. I like it this way. I hope you do too.” I wouldn’t recommend this album to anyone who isn’t already a fan of lo-fi, experimental or “outsider” music, as it is rarely accessible.

If you are already down for music that is usually prefaced by that sort of warning, however, there are some real gems here. Beal has a manner of synthesizing country blues, field hollers, rapping and general lo-fi weirdness in tracks like “Swing on Low” and the especially entrancing “Take Me Away” that I can’t say I’ve ever heard before, and I’m excited to hear more of. Moreover, the lo-fi weirdo narrative is one that isn’t often proscribed to Black artists in the world of indie-music criticism, so there is something very intriguing in watching and hearing it play out. Beal also offers some songs that are less experimental and more simply lovely. Both “Evening’s Kiss” and “Monotony” have the lullaby sweetness of Nick Drake.

Following is a video of “Evening’s Kiss,” one of the more mainstream songs from the  album, from a live performance on Later with Jools Holland (April 20, 2012):

Hopefully Beal will survive his current status as a curiosity of sorts and be able to continue his art in a way that is fulfilling to him and that grants us further access to his diversely creative mind.