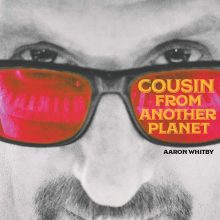 British producer, composer, songwriter, and keyboardist Aaron Whitby has worked with many legendary rock and funk musicians, including the late Walter ‘Junie’ Morrison (Ohio Players), George Clinton (Parliament Funkadelic) and Vernon Reid (Living Colour). On his debut solo album, Cousin From Another Planet, Whitby crash lands on Earth to create a masterful fusion of jazz, rock and funk brewed in the cosmos of the 1970s. Assisting with the creation of his “percolating, stimulating and motor-booty activatin’” music (as described by Greg Tate in the liner notes), is Charlie Burnham (violin), Keith Loftis (tenor sax), Fred Cash (electric bass), Gary Fritz (percussion), and Rodney Homes (drums). Other denizens of this universe include three goddesses of rock, punk, and soul: singers Lisa Fischer, Tamar Kali, and Whitby’s longtime collaborator Martha Redbone. 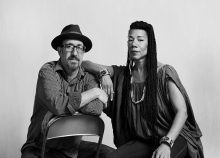 The album is ushered in on a percolating groove with “Sleeping Giant,” featuring Redbone, Kali, and Rome Neal on sung and spoken vocals. This message song urges people (the sleeping giants) to wake up and stand up to endless bigotry. Reminiscent of Blaxploitation soundtracks, the funky title track “Cousin From Another Planet” pairs Redbone with Fischer on vocals, but is primarily a vehicle for Whitby and Loftis to solo. Burnham has several opportunities to demonstrate his versatility on violin, with solo turns in “Walking With Z” and “The Invisible Man Breathes.” The latter traverses an arc from uneasy calm to riotious excursions led by the tenor sax before acquiescing with a classically oriented piano solo. The album comes to a satisfying conclusion on “Escape Route,” with Whitby charting a circuitous course through chord changes on Fender Rhodes, as the rest of the band follows through the twists and turns.

Aaron Whitby’s sonic explorations on Cousin From Another Planet are nothing short of a jazz fusion masterpiece, enhanced by references to Black literary, social and political themes as well as an ace backing band and vocalists.