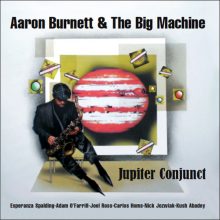 From Aaron Burnett & the Big Machine comes Jupiter Conjunct, a follow up to their 2019 album Anomaly. Drawing on hip-hop and electronica influences, this album pushes the sound of jazz along the trajectory of other current artists like bassist and vocalist Esperanza Spalding, who is a featured guest on this project. Led by Burnett on saxophone, the group consists of trumpeter Adam O’Farrill, keyboardist Carlos Homs, bassist Nick Jozwiak, drummer Kush Abadey, and Joel Ross on vibraphone.

Inspired by Burnett’s reverence for the planet Jupiter as a symbol of prosperity, intellectual and spiritual needs, the album includes tracks named after the planet’s four largest satellites known as the Galilean moons. Esperanza Spalding joins the group on two separate takes of the tune “Ganymede,” lending her flexible voice to the project. Her vocals are an excellent extension of the complex passages used throughout the album. “Callisto,” the outermost moon, is a track dedicated to saxophone giant Wayne Shorter. With a smooth melodic line and chill beats, it is distinctly calmer than the chaotic “Europa,” which features some furious and disjunct moments of fast saxophone passages. “Io,” named after the most volcanically active moon, features some notable vibraphone work from Joel Ross.

With Jupiter Conjunct, Burnett and his band draw from other genres in a push to discover new sounds within a cosmic framework, and their tight musicianship carries them through on this journey.