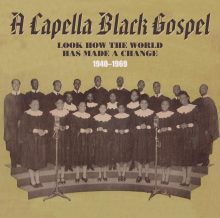 This recent gospel compilation from Swedish producer and collector Per Notini is a three disc, 84 track set focused exclusively on a capella singing without any instrumental accompaniment. Featuring many well-known quartets such as the Fairfield Four and Soul Stirrers as well as lesser known artists, the set traces stylistic changes over a thirty year period, concluding in 1969 before the ‘contemporary’ gospel era. These groups created some of the most inventive and progressive African American vocal music of the post-war period, which had a profound effect on later R&B and soul artists, not to mention artists across all other genres.

Presented in alphabetical order by group, rather than chronological, listeners can more readily compare and contrast artists from different regions of the country. Coverage extends from coast to coast, with the West Coast represented by groups such as McNeil Choir, Luvenia Nash Singers, Pilgrim Travelers, Brother Green’s Southern Sons, Revelators, Rising Star Gospel Singers, and the Sunlight Jubilee Singers of Alameda; Southern-based group include the Famous Blue Jay Singers of Alabama, Heavenly Gospel Singers, Golden Eagles, Sunshine Quartet, Silver Leaf Quartet, Sunny South Singers, and Georgia Peach; Midwest groups include the Melody Gospel Singers of Chicago (who perform the title track), Elite Jewels, Harp Tones of Cincinnati, and the Flying Clouds of Detroit; and from the Northeast are the Coleman Brothers and Original Kings of Harmony.

Quite a few of the recordings on this compilation are considered gospel rarities, released as singles on labels such as Kno-Mar, Pepper, Scoop, Sara and Ohio, and many have never been reissued. Major labels (Aladdin, King, Decca, Savoy, Mercury, etc.) are also well represented, so a portion of these tracks are likely included on many other collections, but it’s the curation of a capella selections that makes this set unique.

In the liner notes, author Ray Templeton explains how, in the absence of instruments, these performers had to work much harder to creative a distinctive sound, which required “assiduous practice, rigorous vocal technique, harmony and dynamics, honed by tireless rehearsal and keen competition.” Across the three decades of releases presented here, one can trace the “continuous innovation and development” of these vocal groups, culminating in the outstanding achievements of quartets such as the Spirit of Memphis and Flying Clouds of Detroit. A Capella Black Gospel: Look How the World Has Made a Change, 1940-1969 is highly recommended for those who wish to study these unaccompanied voices singing in the service of the Lord.