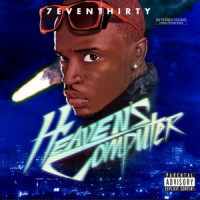 Delivering raps that are as fiery as they are cryptic, that meld high-concept and sci-fi camp to grand cinematic effect, 7evenThirty has landed!  Dropping in hip hop’s proverbial cornfields—Jackson, Mississippi, born and based—7evenThirty’s debut album Heaven’s Computer leaves mysterious but undeniable proof of the dirty South’s strange life forms.

Space Gangsta, Angel of Death, Harbinger of Doom, Outerspace Freak are just some of the honorifics 7evenThirty boasts as he spins the social alienation and violence so often versified in gangsta rap into pop culture kitsch. But his post-apocalyptic futurism is not the source of social commentary as much as artistic bravado. In Heaven’s Computer, 7evenThirty tries to avenge a hostile world with his furious flow, with his visionary beats.

With Del the Funky Homosapien and Afrikaa Bambataa well before him, and Sun Ra and Parliament well before that, 7evenThirty’s space-freak act is hardly novel. He even makes the “Mothership” connection in “Getup!!!”  What does seem fairly distinct about 7evenThirty’s music, however, is his experimental take on the Southern rap line, earning him more than a few comparisons to Outkast. The arena-rock flavored murder ballad “Earth Gurl,” one of the album’s best, does have the sinister party stylings of Andre 3000/Big Boi, and that ain’t no small feat for a debut album.

He samples and fuses different styles of music—‘80s rock and r&b, chief among them—to produce gritty, sharp-toothed hip hop topped with a fluorescent halo of synthesizers and laser beams of hair-metal guitar. In fact, “Twenty Twelve” sounds like the music from Grand Theft Auto, subbing vehicular madness for space-age capers.

7evenThirty fuses unlike elements to achieve an even sound, one that has been as thoughtfully constructed as the space-themed concept album as a whole. According to 7evenThirty’s cosmology, as explained to us by Alfie, 7evenThirty’s cyborg sidekick, space invading aliens have been beaming martial warnings to Earth in the form of radio frequencies. Hip Hop is their native tongue, 7evenThirty is their representative.

7evenThirty’s elaborate storytelling has earned the album cinematic comparisons: “Blade Runner Meets Back to the Future” reads his press kit. But for its grittiness and dark humor, Heaven’s Computer plays out more like John Sayles sci-fi comedy Brother From Another Planet, in which Brother, the Black alien who crashlands in Harlem, is so jarringly different that the Harlemites mistake him for a backward Southerner. One character says, “I’d rather be a cockroach on a baseboard up here than the Emperor of Mississippi.” Proudly boasting “I’m from the South” throughout the album, 7evenThirty embraces his Mississippi roots to cultivate his alien persona and transmit his stratospheric brand of dirty South hip hop.