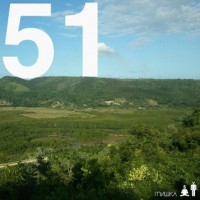 Rapper Kool A.D.’s newest mixtape 51 is prepped to make anyone who has ever lived in Oakland, California feel homesick for the East Bay. Kool A.D. has always been the showman of Das Racist, charming crowds with his antics (“Oh, look! He’s texting on stage!” “Oh man, he’s gonna crowd surf!” “He just gave everyone high-fives!”), and generally wooing audiences with his genuine and effortless cool-dude vibe. Critics have often chalked up his laid back, class clown demeanor to his California roots, setting him up in stark contrast to the more aggressive flow of his Queens born and bred band mate, Himanshu Suri, a.k.a Heems.  Whether the difference in aesthetics correlates to personality or geography, the combination has led Das Racist to success, both critical and popular, with their mixtapes Shut Up, Dude and Sit Down, Man, and their first official album Relax. As solo artists, on the other hand, the praise has been mixed. While Heems’ last mixtape Nehru Jackets was well received, opinionated bloggers across the internet seemed to find Kool A.D.’s Palm Wine Drinkard (released in January) quite divisive; apparently they were not ready for or supportive of his musical experimentation.

Kool A.D., however, does not seem like one to be swayed by critical opinion and continues to pursue his sounds as he desires them on 51. Recorded and produced almost entirely in Oakland, 51 combines his intense, yet somehow always chill, creative curiosity with classic California cool production by old friend Amaze 88. Added to the mix are on the money guest spots from some of the East Bay’s finest, including Main Attrakionz and Young L of The Pack.

Following is the music video for the track “La Piñata”:

Kool A.D. has an almost unprecedented ability to mix summertime car-ride jams, like the soon to be “cross-faded on a warm evening” classic “Town Business,” with tracks like “Gentry” that place a speech by Huey P. Newton on oppression via police above an easy beat, and with softly personal raps like “Arrested Development” with the self deprecating verse:

Overall, 51 manages to reach the pinnacle of creative experimentation in popular music: a mixtape that is both surprising and comfortable, unexpected but entirely fluid.