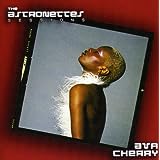 Like Betty Davis and Grace Jones, Ava Cherry was a stunning model-turned-singer who rose to fame in the ‘70s, hung with an A-list crowd of artists and musicians, and blazed a trail as a fashionista whose style melded glam rock with futuristic punk overtones. Not surprising, since Cherry was mentored by David Bowie, whom she met shortly after his Ziggy Stardust period.

Cherry performed with Bowie from 1974-1978 as one of his Astronettes-the trio of back-up singers/dancers that included Cherry, Geoffrey MacCormack, Jason Guess-and later a young Luther Vandross. They performed on his Young American album, noteworthy for signaling the shift from glitter rock to “plastic soul,” a term coined by Bowie to explain the mashup of avant pop with Philly soul that he explored for a couple of years.  During this period Bowie was even invited to perform his funk-laden hit songs “Fame” and “Golden Years” on Soul Train, one of the few white artists to receive that distinction (clips on YouTube seem to confirm that he also had some chemical dependency issues).

The tracks comprising the Astronette Sessions were recorded in December 1973 in London and January 1974 in New York.  Produced by Bowie, the album is a rather curious artifact of the era-an assemblage of covers ranging from Frank Zappa’s “How Could I Be Such a Fool” and Bruce Springsteen’s “Spirit in the Night” to an up-tempo arrangement of the jazz standard “I’m in the Mood for Love” that has an unidentified male vocalist scatting over and around her solo (talk about mashups . . .). The bulk of the album features songs written by Bowie, such as “Iamalaser,” “People from Bad Homes,” and “Onlyme.”

Backing up Cherry were several Bowie regulars, including Mark Carr Pritchard on guitar, Mike Garson (from the Ziggy Stardust tour) on keyboards, Herbie Flowers (who later worked with Elton John and Lou Reed) on bass guitar, and Aynsley Dunbar on drums (Dunbar was “almost” hired as Hendrix’ original drummer and was a long-time member of Zappa’s band). Unfortunately, back-up singers are unidentified, and the liner notes by Paul Trynka are somewhat sketchy.

Due to Bowie’s legal and financial issues with his current manager, Cherry’s Astronette project was shelved for 22 years, not to be resurrected until 1995 when it was briefly released with the uninspiring title People from Bad Homes (a Bowie song and the title track).  In 2008 the album was remastered in London and reissued as The Astronette Sessions on Cherry’s own Black Barbarella label. Included is the bonus track “I am Divine,” a disco-leaning funk anthem sung by an unidentified male singer, possibly Jason Guess.

Cherry went on to release several more albums during the 1980s to little acclaim. Her attempt to record rock songs for Curtis Mayfield’s Curtom label was rejected, and like other black artists during that era, she was encouraged to “convert” to soul and disco. She eventually ditched her solo career and joined Luther Vandross as a backup singer and dancer, touring with him for 10 years. Though information on Cherry’s recent activities is scarce, according to her website a full-length album is ready for release as soon as a distributor is found. Let’s hope that comes to pass.